The historic cafés of Athens 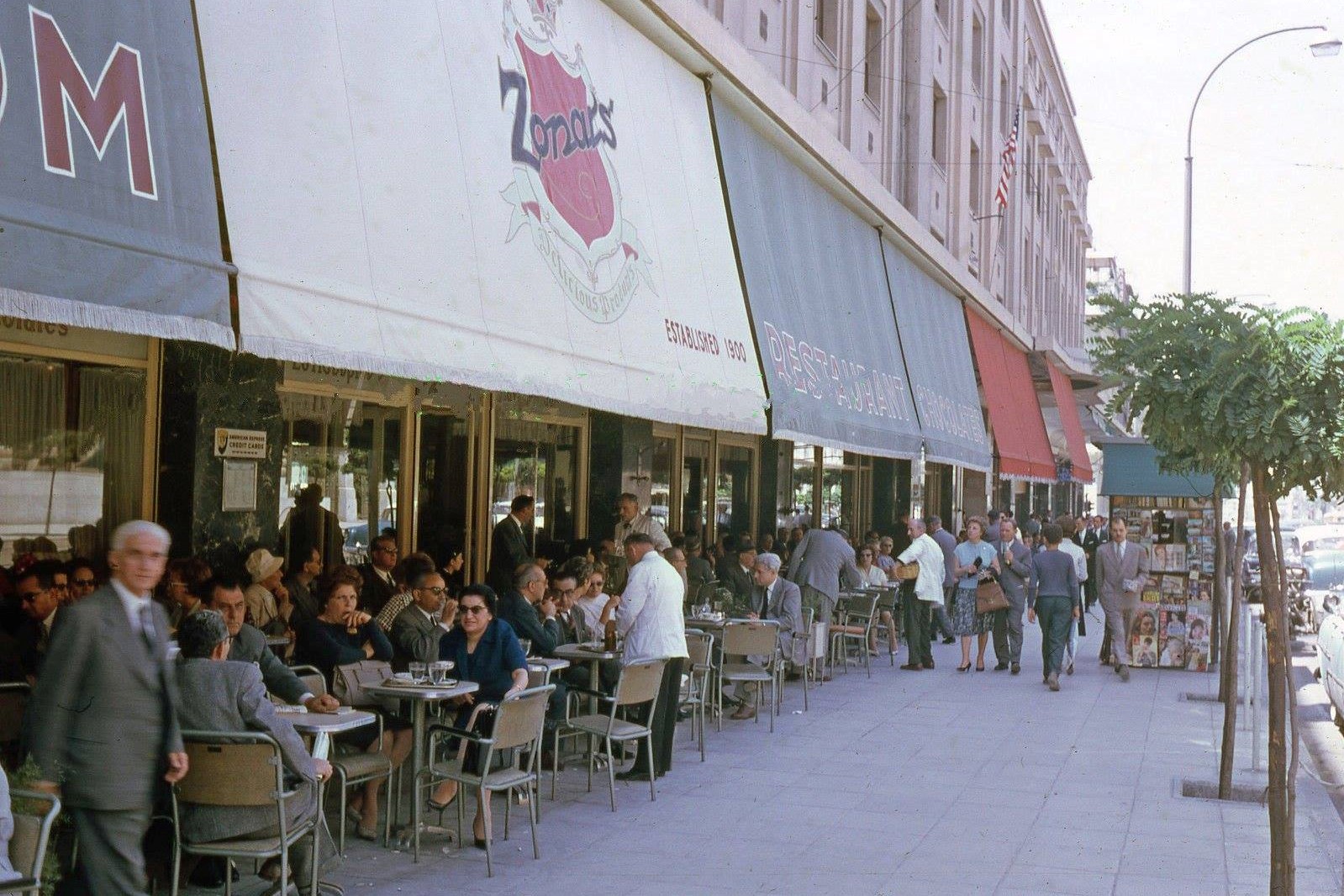 Athens was always a city with intense day and night life. Greeks are known for their extrovert way of life and in the capital there were plenty of cafés (kafenia), taverns (tavernes) and pothouses (kapilia), where the locals used to pass much of their time.

Greek cafés could be distinguished in café-confectioneries and café-snack bars, with the first ones being more luxurious and the second ones more popular and of no particular interest.

In the heart of Athens there were some very famous café-confectioneries. On their tables the history of contemporary Greece is written. Let´s visit some of them:

This historic café-confectionery (9, Panepistimiou str) was founded in 1939 by the Greek expatriate Karolos Zonaras, a businessman, who had returned to Greece from the Ohio, USA, where he had opened a successful and profitable chocolate industry.

The wooden upholstery, creation of the famous furniture company “Athinaios & Varangis”, the chandeliers, the crystals and the mirrors, the expensive tableware and the linen tablecloths gave Zonar’s a feeling of grandeur and a pleasant environment.

The well known author and journalist Dimitris Psathas had described it as “the most luxurious confectionery in Athens, of a type similar to the largest and most beautiful in Vienna”.

Zonar’s for decades was part of everyday life in the city center and a popular hangout of Athens’ politics, artists, intellectuals, as well as common people.

Its frequent guests from the circle of politics, writers and artists were, among others, the prime minister of the time Konstantinos Karamanlis, the Nobel laureate Odysseus Elytis, the poet Nikos Gatsos, the painter Nikos Hatzikyriakos-Gikas, the actors Dimitris Myrat, Jenny Karezi and Aliki Vougiouklaki, the director Minos Volanakis, the composer Manos Hadzidakis , the journalist Freddy Germanos, the writer Iakovos Kampanellis etc.

But also foreign celebrities, such as writers Lawrence Darrell and Jorge Luis Borges, as well as actors, like Anthony Quinn and Sophia Loren had visited Zonar’s, when they were in Athens.

Zonar’s was known for its pastries, such as it’s famous “Chicago” ice cream, which Athenians tasted for the first time, brought at the time from America by the owner Karolos Zonaras

After the death of its owner in 1968, Zonar’s began to lose its glamor, until it closed in 2000. 10 years later it has opened again under new management but just 2 years ago, after a long trial, it has no more the right to use the brand name Zonar’s as the local justice decided that its beneficiary was a different person.

It opened in Omonia square in 1920 and immediately became one of the emblematic elements of the area, serving coffee, baklava, galaktoboureko and rice pudding. It was a miniature of the city’s human geography, where all kinds of people were gathering.

Moreover, Neon was a reference point for the local intellectuals, as the famous poet Yannis Ritsos and the also famous painter Yannis Tsarouchis, used to drink their coffee side by side with peasants from the Greek country, ladies who went shopping, lawyers who after the court went to drink alcohol etc.

Today, Neon is an enormous bakery, branch of a large company and there is nothing interesting about it. What a pity.

It opened during the decade of 1880 in the actual Syntagma (Constitution) square. Due to its proximity to the Palace and the Parliament, it quickly became a hangout for politicians, journalists, intellectuals and famous artists, a pole of attraction for Athenians of all social classes.

Such was its importance in the political life of Athens, that the prime minister George Papandreou was charged with the phrase: “Zacharatos is the second parliament and perhaps freer than the real one”

The café was visited daily by the great poet Konstantinos Cavafis, during his first trip to Athens, in the summer of 1901.

Around the end of the 19th century, Zacharatos opened a second store in Syntagma Square, which he turned into a brewery. However, it also offered confectionery. Its specialties were ice cream, coke and “Copenhagen” dessert and, above all, the “submarine”: a large spoonful of mastic cream immerged in ice water.

Its final end came in the 1960s, along with the demolition of the mansion that housed it.