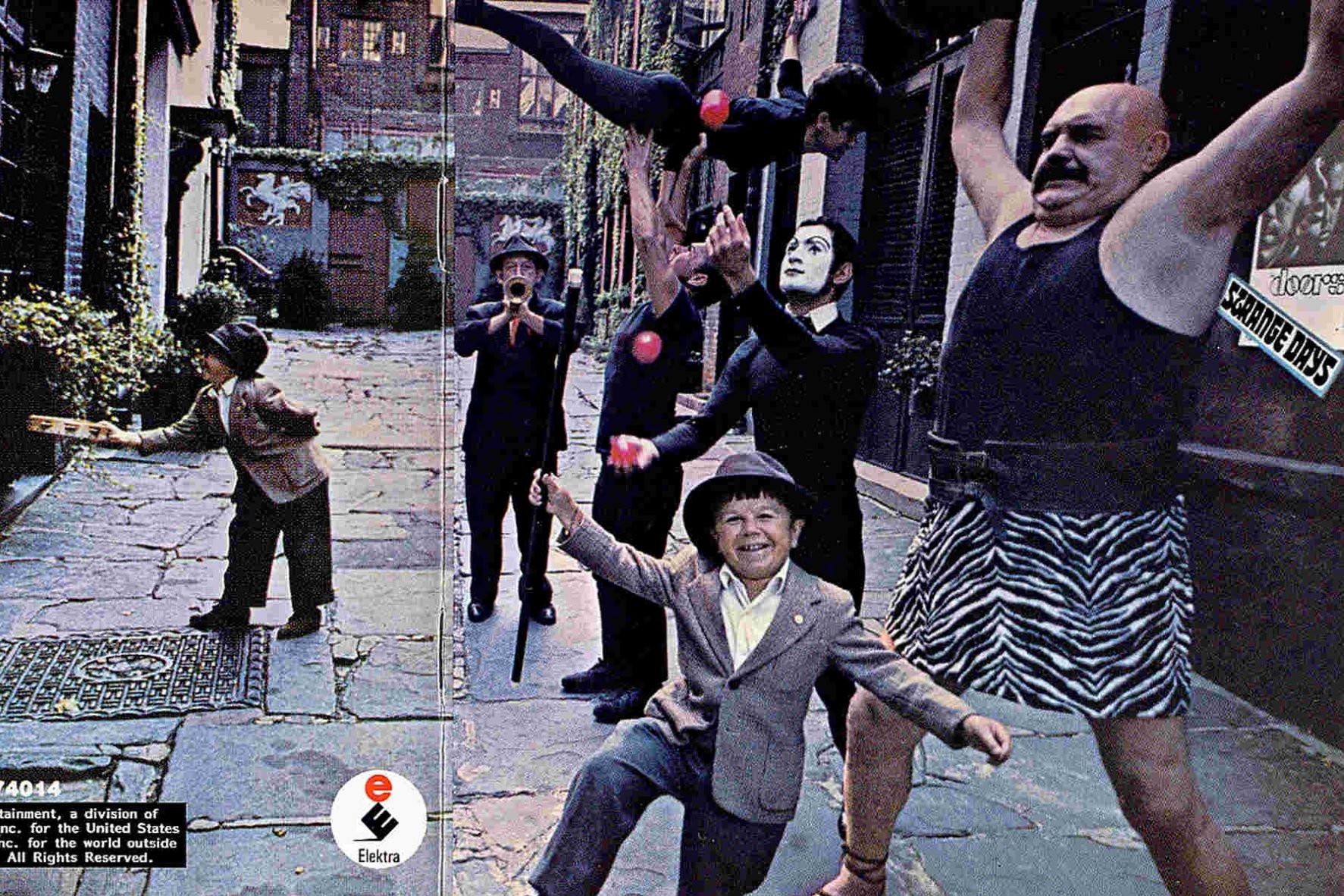 While the Doors were promoting their first homonymous album, they were also recording in Sunset Studios, Hollywood LA (the same studio as their first LP) their second one, Strange Days. In this album the Doors were experimenting with a new Moog synthesizer. These experiments have been described as one of the first uses of the synth in rock music history. The Moog synthie (played by Morrison himself and not by Manzarek) was not the only strange instrument of the Strange days LP, as Marimba, a Mexican percussion instrument was also being used.

It must be noted that during this period (we are in the summer of 1967) the Doors gave a memorable performance of “Light My Fire” on the Ed Sullivan show, where network executives asked them that the word “higher” be removed due to a possible reference to drug use. Although the group appeared to acquiesce, they finally performed the song in its original form, because either they had never intended to comply with the request or Jim Morrison was nervous and forgot to make the change. Either way, “higher” was sung out on national television and the show’s host cancelled later another six shows that had been planned. Strange Days was the first Doors album recorded with a studio musician, playing bass on the majority of the record, and this continued on all subsequent studio albums. Manzarek explained that his keyboard bass was well-suited for live situations but that it lacked the “articulation” needed for studio recording.

Strange Days contained initially 10 tracks, nine of common length and one of “TheEndy” size, the later classic “΅When the music´ s over”. The commercial success of Strange Days was middling, peaking at number three on the Billboard album chart, but quickly dropping, along with a series of underperforming singles. Let´´ s have a look at the most important of them.

The first track of the album is “Strange Days”. The song’s lyrics were inspired by a visit of the Doors in New York (“and through their strange hours“). The track is known for its distinctive usage of the Moog synthesizer. The synth was provided by Jim Morrison to filter his vocals by playing notes, and it was hooked up with the help of the famous American musician Paul Biever.

Two music videos were made for the song. The first featured footage of the band backstage and onstage, as well as Jim Morrison driving his car into a hole in sand and jumping on the hood in frustration. The second features the same circus performers on the Strange Days cover photo, who would explore New York City. All of this new footage was mixed with footage of the old video, and re-released as a re-mixed video.

“Love Me Two Times” was the third track of the album. It was later edited to a 2:37 length and released as the second single from Strange Days LP. The single reached number 25 on the charts in the United States. “Love Me Two Times” was considered to be somewhat risqué for radio airplay, being banned in New Haven for being “too controversial” much to the dismay of the band. It incorporates elements from baroque music although it has been classified as a pop song. Manzarek played the final version of this song on a harpsichord which he described as “a most elegant instrument that one does not normally associate with rock and roll”.

According to author Rich Weidman the song is about a sailor or soldier spending one last day with his girlfriend before shipping out to war. In my opinion, “Love me two times” is one of the greatest love songs ever. It starts with an extraordinary bluesy guitar riff, it contains some of the best Morrison vocals and, above all, simple, common, everyday lyrics.

Moonlight Drive was one of the first songs written by Jim Morrison. Although it has a conventional blues arrangement, it is well characterized by Krieger´ s ´slide guitars. Morrison had written “Moonlight Ride”, during his halcyon days on a rooftop in 1965. Later, he added the memorable lines “Let’s swim to the moon, let’s climb through the tide, penetrate the evening that the city sleeps to hide”

“Moonlight Drive” was at first recorded along with other songs during the group’s first demo recordings at Trans World Pacific Studios. It was also recorded the following year for the band’s eponymous first album but eventually did not appear; this was due to the band members’ dissatisfaction with the initial version of the song, which was different from the later album version as a result.

“People are strange” is one of Doors´ top-5 songs. Actually, it was the first song of them I listened to.

The song’s composition started in early 1967. According to Doors drummer John Densmore he and Doors guitarist Robby Krieger were visited by Jim Morrison who appeared to be “deeply depressed”. They later took a walk which provoked to Morrison euphoria and inspired him writing the early lyrics of “People Are Strange”.

Krieger was convinced that the song was a hit upon hearing the vocal melody, but actually People Are Strange just reached no 12 on Billboard Hot 100.

Critic Tom Maginnis wrote that the song “reflects the group’s fascination with the theatrical music of European cabaret”, while Cashbox called it a “smashing performance”, saying that the “mid-speed setting … adds kick to the black humor of the lyrical content” and that the “production was fantastic”

I only add to these reviews the monumental piano-riff, performed by Manzarek, starting at 1.30 min.

The last track of the album was the epic “΅When the music´ s over”, a monster track about 11 minutes long. Densmore said about it: “Playing that song was intense. I had to take a deep breath before playing it, because it’s not a little three-minute pop ditty.”

The song can be divided into five parts, where the fifth returns to the lyrics and theme of the first.

“Turn Out the Lights/Dance on Fire”

“What Have They Done to the Earth?”

“Return to the Main Themes”

Like several other songs from their second album, Strange Days was composed before they had a record contract, being performed and elaborated in the middle of 1966 at the Whisky a Go Go in Los Angeles. The song is characterized by a Krieger guitar solo, who wrote about it: “That solo was really a challenge because the harmony is static. I had to play 56 bars over the same riff”

Enjoy one of the greatest performers of all time.