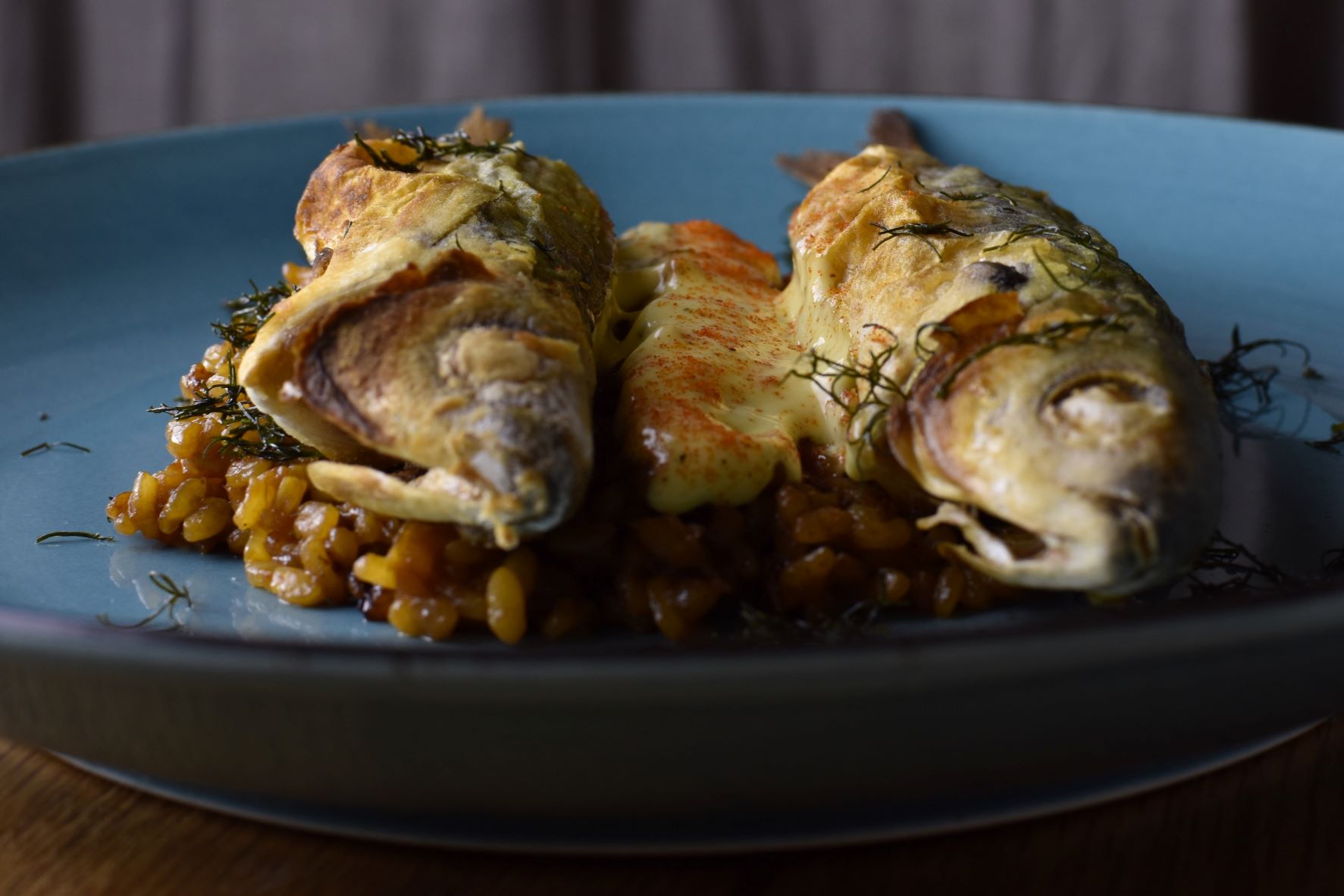 Fennel is a first choice herb for fish dishes

ingredients for 4 servings (cost about 6 € pp)

Rice in Spain covers a very large part of the weekly diet. At least 2-3 meals every week contain rice, especially on Thursdays, the daily menu offered by the restaurants there, almost necessarily contains a paella. Dijous Paella or La paella de los jueves (ie Thursday rice) are an institution in Spain.

The dry rice dishes or paellas (in Catalan arrossos secs), are cooked in wide and shallow – so as to facilitate evaporation- pans (CALLED PAELLAS) and are not stirred at all, unlike risotto, which is known to require intense and relatively continuous stirring. So you realize that these rice dishes should not be creamy, quite the opposite. The bomba or arroz redondo varieties are mainly used for these preparations. For that reason the rice must be thoroughly washed under running water to eliminate as much starch as possible and must remain al dente.

These wide, shallow and non-stick utensils are mandatory for these preparations, as apart from being means of cooking, they are also used for serving. Indeed, as the rice cools and dries inside the paella pan, the “socarrat” is formed, which means the concentrated and caramelized membrane produced by the boiling stock, the rice starches and the sugars of the tomato. There is a huge difference between a rice served directly on the plate and one that is left for a while in the paella pan and is transferred on the plate in small portions, consumed almost immediately.

Let’s see which is exactly the procedure of making a Spanish dry rice:

After washing the rice very well under plenty of running water, we usually start preparing and cooking the peripheral ingredients, ie the ones with which we will pair the rice. Today we use fried fish which does not require a lot of time, so we can postpone its preparation for later.

If we have ready “sofregit” (the local soffritto) in our freezer, we can proceed to the next step. Otherwise we fry chopped onion and one very well grated bay leaf in the paella utensil and when it turns golden, we add white wine and wait for it to evaporate. We add the tomato cut in small dice and we cook until it darkens slightly, stirring constantly so as not to burn and correcting, if necessary, its composition with a little water. CAUTION, the mixture should not be dark browned, because it will turn bitter and it will destroy the whole preparation.

When the mixture reaches the desired colour, we add hot stock ( X 3 the quantity of the rice, we don´t forget we want a very dry result) and salt. Caution: We Pour all the stock at the same time, not in ladles like in the risotto. I remind you that in all rice preparations the stock must always be lightly salted and very hot so that the boiling process is not interrupted. It should be noted that the amount of rice should not be large. For example, for an utensil with a diameter of 28 or 30 cm, the maximum we use is about 200 grams of rice.

Having high heat we add the rice into the pan and we distribute it evenly with the ladle. We do not stir the rice further in the liquid because, we do not want its starches to be released in the pan. We boil on a relatively high heat for about 5 minutes, without stirring.

We lower the heat to medium-low and we let the rice simmer and soften. After 10 minutes, we check the saltiness and we turn off the heat.

We then put the utensil in a preheated oven at 180 degrees for about 8 to 10 minutes to let the liquids bind and make the rice crunchy. WE DO NOT MIX AT ALL. If we do not have an oven, we raise the temperature to maximum and we cook for about 3 more minutes. Our aim is, I repeat, to form at the bottom of the pan the “socarrat”, a film of oil, stock, tomato juices and rice starches, which should create a crunchy effect like that of the Persian rice.

Having well learned the procedure for every paella we start preparing today´s dish. We soak the mushrooms in lukewarm water for 30 mins. We mince them.

We then prepare the allioli sauce. Do you remember how? We beat at the immersion blender two garlic cloves with a little bit of salt, an egg yolk and two tablespoonfuls water and then we start adding 200 ml of EV sunflower oil till creating an emulsion. That´s all!!!!!

We proceed with the rice preparation as already explained, with the only difference that we add the dried mushrooms the same time with the onion or the sofregit. When the 80% of the stock will have been absorbed we put in the oven for 5 minutes.

Meanwhile, in a large skillet we preheat the EV sunflower oil to 190 Celsius degrees. We dust the bogues (or other cheap fish) with flour and we fry them, 2 at a time, for approximately 2-3 minutes. I like the bogues with crunchy skin and moist flesh. If you want a more homogeneous result, lower the temperature to 170 degrees and fry for about 4 minutes.

When the time passes we remove the paella pan from the oven, we put the rice and the bogues in plates and we serve garnishing with the trimmed fennel leaves, the allioli sauce and paprika de la Vera.