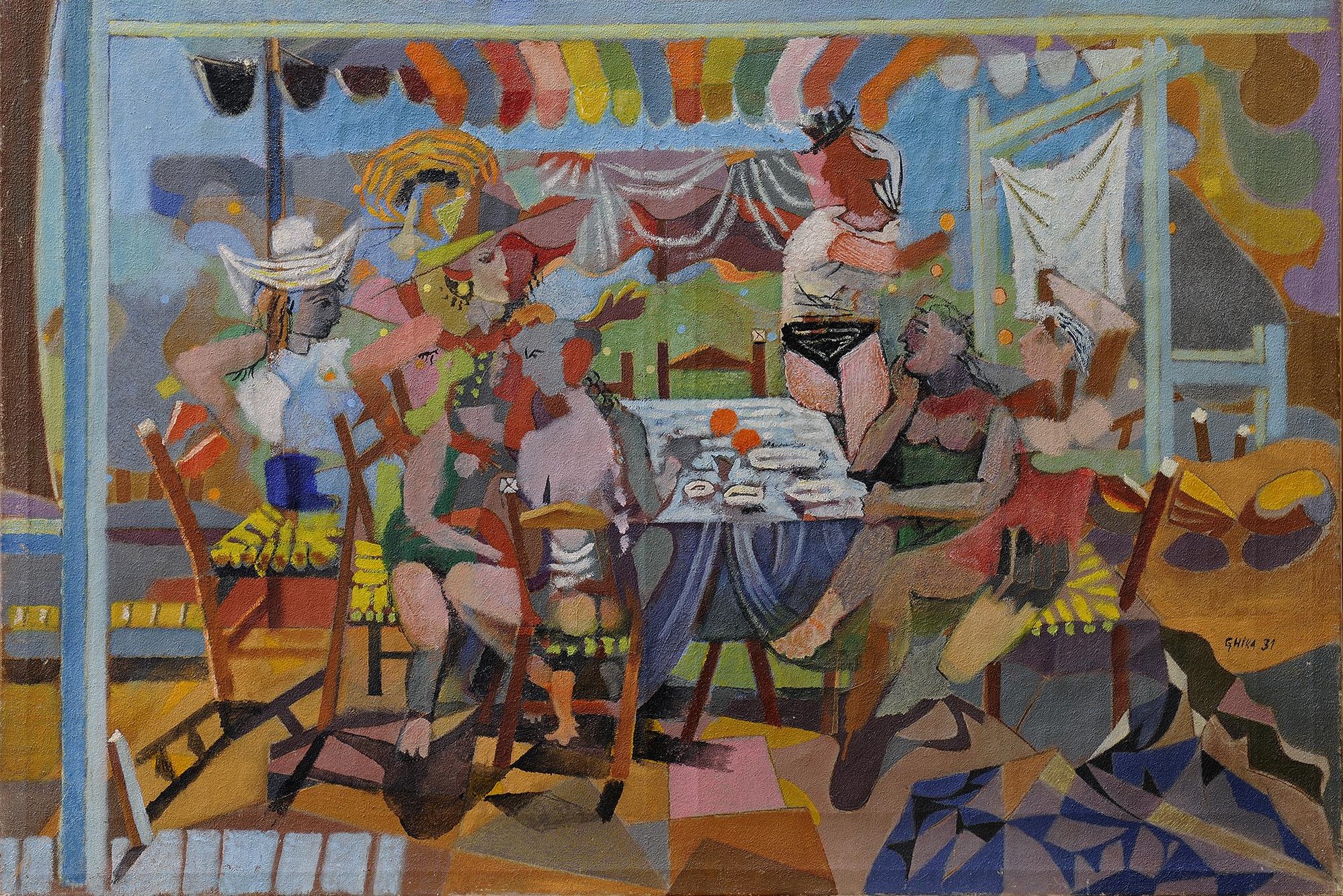 Nikos Hatzikyriakos-Ghikas (1906-1994), was a leading Greek cubist artist, who began his studies as a student of Kosntantinos Parthenis.

Combining the principals of Cubism, Post-Cubism, Constructivism and other Avant-garde elements with various types of Greek art, Ghikas created a merely personal style, which identified him. Through his art, he tried to deconstruct the Greek landscape into simple geometric shapes, aiming to point out the harmony and purity of Greek art.

Like Parthenis, Ghikas was not interested at all in the realism and objectivity of his paintings. What is different in his case, is that his depictions were not at all free – style. On the contrary, he used strict geometrical forms, in which he enclosed all his depicted elements.

So, let’s take a look at two characteristic paintings of the artist.

In the above shown painting, Ghikas has placed his theme, the figs, in the center of the scene and he has enclosed it in an octagonal frame.

At the right side of the frame the painter has added some green vegetables, and apart from that, the painting is complemented with irrelevant decorative elements, mostly multicolored geometric patterns.

On the right bottom it seems that an opened box has been placed and on the upper one the shadow of a human face depicted in profile.

Vibrant earthy colors prevail, such as brown, green, as well as that of terracotta, colors that match those of figs.

The painting as a whole has a color intensity and harmony.

The second painting has an even more pronounced cubist and constructivist structure than the previous one.

The painting shows a grocery store, in front of which, we can see the showcase with its products, which, however, are not at all identifiable.

Indeed, it is difficult to understand whether they are fruits or vegetables, much less what their specific kind is.

The painter is mainly occupied with delimiting the painting into multiple triangular areas and placing his elements on each of these areas, something that characterizes Ghikas’ style in general. The result of this deliberate deconstruction of the image gives us the impression of a reflection into a broken mirror.

If we look at all the pieces that the artist has created, we will identify many elements that one can find in a grocery store, such as baskets for the products, shelves, a counter, the door entrance, a window, an awning, an inscription with the name of the store, a wallpaper and a plant.

What makes the depiction special and creates a dramatic mood, is the erratic placement within the painting of the above mentioned elements.

As for the colors, we notice that vivid ones have been chosen again, but this time even more intense, compared to the previous painting, as it would suit a grocery store full of colorful products.

In 1992, the Chatizikyriakos – Ghikas Museum was founded in Athens, in cooperation with the Benaki Museum. Moreover, the artist’s house has been converted to a museum run by the Benaki Museum, as well.

Works of his are featured in the National Gallery of Athens, the Museum of Modern Art of Paris, the Tate Gallery in London, the Metropolitan Museum of New York and in private collections worldwide.