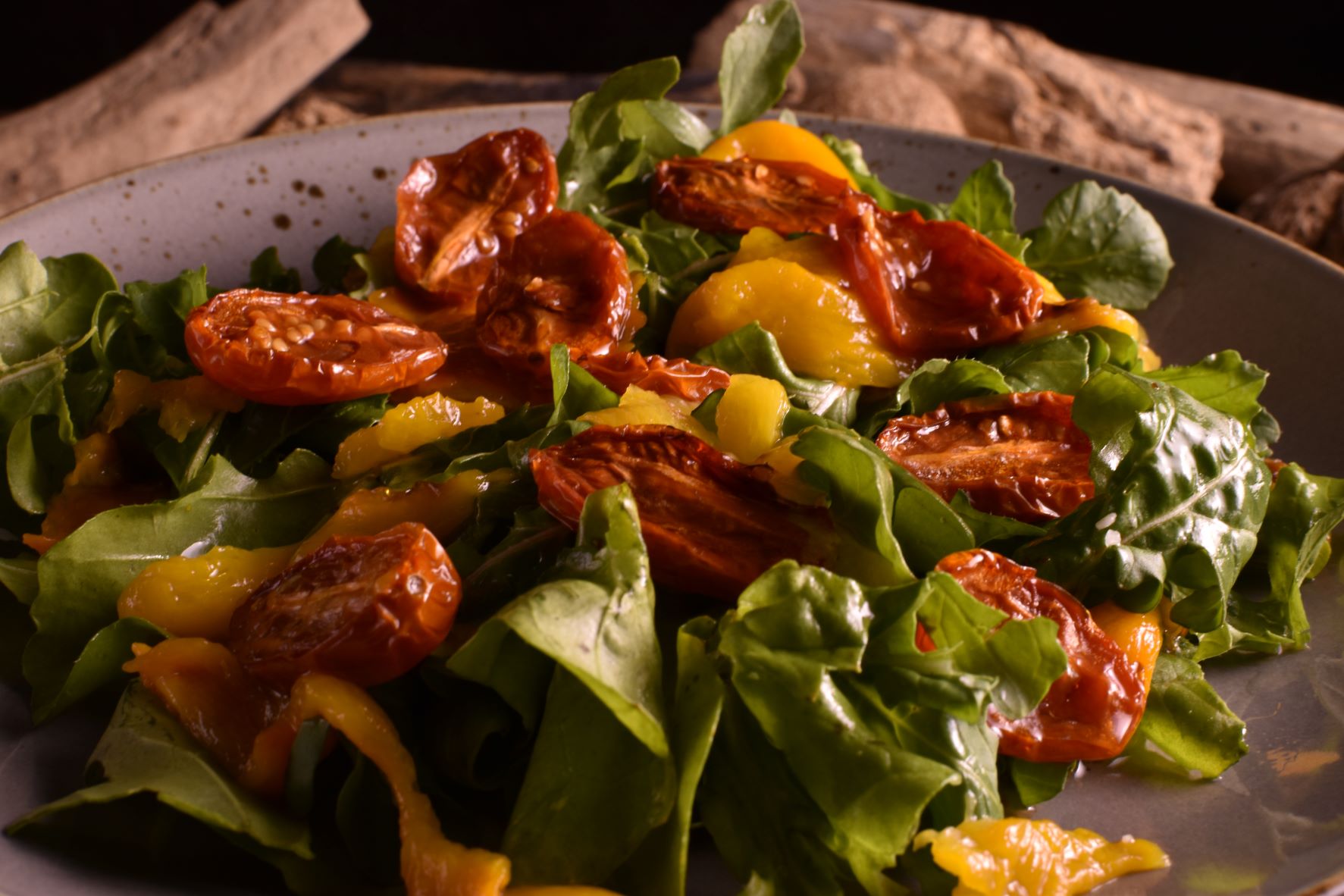 Rocket is a wild leafy vegetable, preferred by ……..donkeys. That does not mean that if we eat it, we are donkeys too

I don´t understand people who like lettuce. Lettuce is awful, tasteless, watery. Even its colour is not vivid, nor aggressive. There are many tastier leafy vegetables, than lettuce. Rocket is one of them, especially the wild one.

Rockets (there are many varieties, wild, cultivated, curly, purple, green etc.) have a slightly pungent, peppery taste, therefore they require a ………… vinaigrette. Come on. Fill in the blank. What kind of vinaigrette should we add to a rocket salad?

-Actually, rockets need more acid and sub-sweet vinaigrettes to balance with the vegetable’s pungent aroma. That’s why we add honey to today’s vinaigrette.

One more thing. A good cook has to obtain the maximum from the ingredients used. Especially the tomatoes (a miraculous fruit) can be elaborated in order to raise their aroma. There are many techniques. Cooking, roasting, pre-salting, drying etc. Today, I have decided to lightly roast them, using low temperatures, aiming to raise the umami, to reduce the humidity but also to avoid the creation of the Maillard reactions, which would cover the aromas of the other ingredients.

I also peel the peppers, because their skin is not easily digestible. If peppers don’t have a thick skin, as some horn shaped ones, we can leave them unpeeled.

There are many ways to peel a pepper. Many cooks suggest burning them over a stove or with the gas burner, but I don’t like this solution, as this way tiny black remains are provoked on the burnt skin. What I do is to cut peppers in halves, remove their seeds and the white fibres (which are in the inner part) and to broil them at 200 C degrees, skin side up. When ready, I put the peppers in a plastic bag. I seal the bag and I let the peppers rest inside for about half an hour. After that, peeling them will be even easier, than eating them.

While the oven is still on, we also prepare the cherry tomatoes. We reduce the temperature to 100 C degrees and we select the ventilator function. We cut the tomatoes in halves, we salt them and we put them in the oven for about 10-15 minutes as we don’t want them well roasted.

We prepare the vinaigrette, as usual, diluting the salt in the vinegar and the honey and right after the olive oil, very slowly. We add pepper and we check the saltiness.

We clean and pat dry very well the rocket, we remove the stalks and any damaged leaves and we mix it gently with the vinaigrette.

We put some rocket in serving plates, we add the peppers, cut in uneven pieces and the cherry tomatoes.