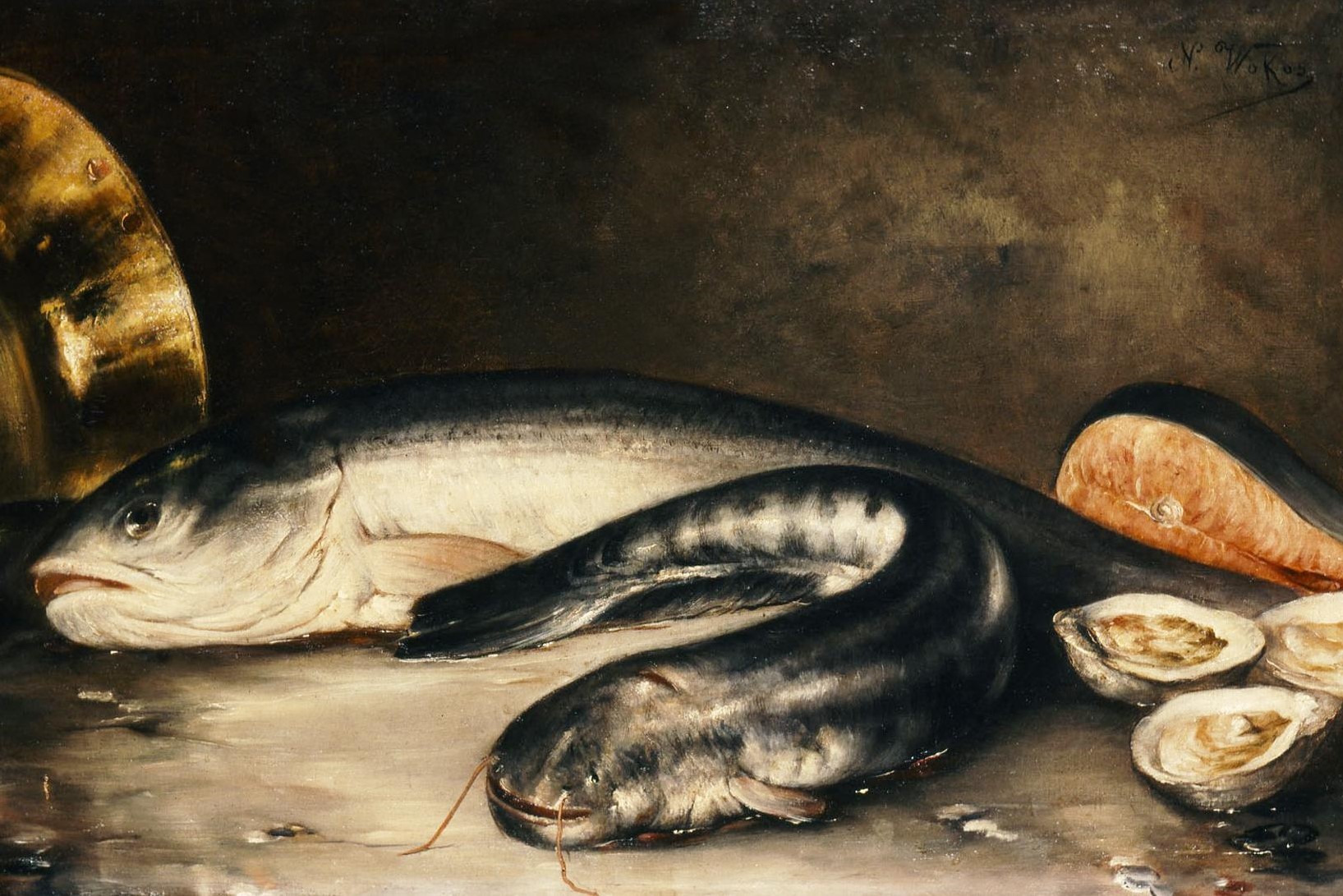 Nikolaos Vokos (1854-1902) was born at Hydra and was the grandson of the famous admiral of the Greek revolution, Andreas Miaoulis.

Like his teachers Nikolaos Gyzis and Nikiforos Lytras, he belonged to the artistic movement of Academic Realism.

At the beginning of his career Vokos dealt with genre painting and portraits, but soon he turned almost exclusively to still lives, mostly fish and shells, something normal, given his island origin.

Let us take a closer look at the artist’ s notorious painting “the Fisherman”, which won the Chicago Award.

In the painting, which is, maybe, my favorite of Vokos, we can admire a realistic and skillfully organized scene.

The action is unfolded in a wooden cabin, with hanging nets, in the middle of which the painter has placed his protagonist.

The fisherman, an elderly man, is standing behind his bench, he wears a leather – probably waterproof – apron and has his sleeves rolled up.

His hands are muscular and his grip is strong. In one of them he is holding a big knife and in the other an even bigger fish and seems about to start cutting it. He is looking towards us with a wide smile, as if he is proudly showing off his fish to a potential customer.

On the bench, the old man has spread his merchandise that consists of more big fish, one of which is already cut, with its pink flesh being visible. The scene is completed by a turbot and a basket full of smaller fish.

The colors chosen by the painter, are mainly natural. Ochre, brownish shades of wood for cabin and bench and silver – grey ones for the skin of the fish and the fisherman’s apron and hair. The only color that stands out, interrupting the general harmony, is the orange – red of the man’s shirt and cheeks, as well as the pink – red of the flesh of the cut fish.

The realism of the illustration is found not only in the the drawing and the colors of its elements, but also in the lighting of the painting. We can understand that the artist has majestically used the side window which appears on the left of the painting to illuminate his scene with the natural light that enters the cabin from there and reflects on the left side of each element, while the shades fall to the right.

The painting is, indeed, a triumph of realism, and at the same time a genuine example of genre painting, as it depicts a scene from the everyday life of an ordinary man in work.

There are many paintings of Vokos depicting fish and oysters, something that seems to have been the painter’s favorite combination of subjects, all distinguished for their impressive realism. Here you can see a couple of them.

And here is another painting with the artist’s favorite theme.

Well, there is not much more to say. After all, when it comes to realism, the image speaks for itself.