Castellers: Touching the sky with the hand 1 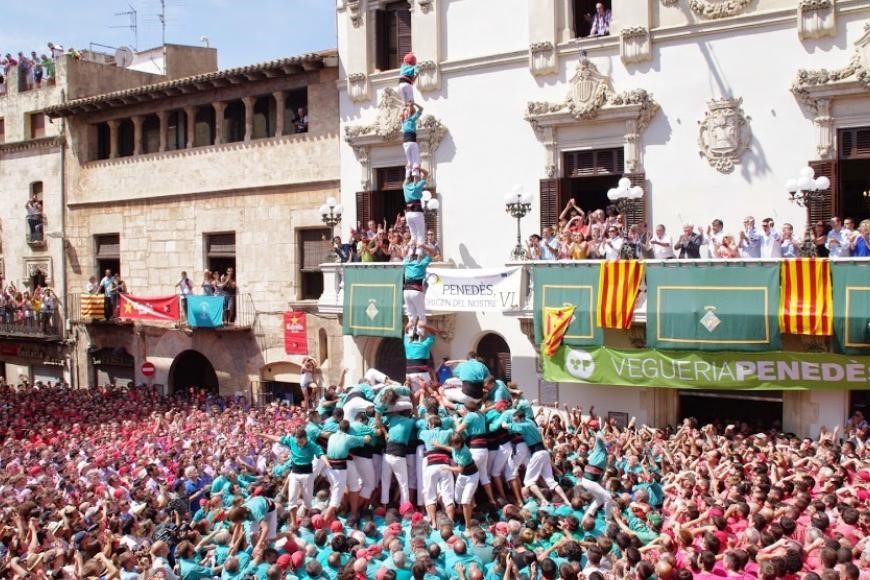 I will never in my life forget the first time I saw the Castellers.

It was in Girona and it happened at a time when we knew absolutely nothing about Catalonia, its culture and traditions.

While wandering the graphic alleys close to the cathedral, we suddenly heard a loud cheering.

We approached and soon we found ourselves in a square among an enthusiastic crowd, staring towards the same direction. The balconies of the buildings, surrounding the square, were also full of people screaming joyfully.

We got even closer and we saw dozens of men, piled in concentric rows, held tightly together and forming a solid structure.

– What is going on? I asked someone standing next to me.

– They are Castellers. They are about to build a human tower!

– They are about to built, what? I repeated.

Before receiving an answer, I saw more people, all barefoot and dressed identically, appearing rapidly from all sides and beginning to climb on the backs of those who had already formed the bottom massive structure, building exactly as I was told, a “human” tower.

When some first basic levels were completed, a strange instrument, resembling a hoarse trumpet, began to play a bizarre characteristic tune.

As the “Castellers” (well, I forgot, the word means the Castle men) were being placed creating the first levels, others continued to climb very quickly on the backs of the former ones and to form more levels.

The coordination of their movements was astonishing. It was obvious that they had been practicing for hours and hours like a real team. In fact, they were a team.

I was, also impressed to see that on the upper levels of the tower, women were climbing instead of men and on the top ones small children with helmets on their heads!!!

Finally, I saw a girl – not older than 5-6 years – climbing on another child. She stood for just 2-3 seconds on the top and raised an open hand high in the sky.

– “This is the enxaneta”, explained the fellow next to me, the one that had previously informed me about what was happening.

Then, the “enxaneta” started climbing down, by sliding, again very quickly, on the backs of those below. After that, the remaining levels of castellers descended in highest to lowest order, until the whole structure was dismantled.

While the disassembly was proceeding, the crowd was cheering loudly and the hoarse trumpet continued playing its rhythmic music.

In order to make you understand what exactly happens, here is a fascinating video of the Marrecs of Salt, performing in the central square of Girona.

This unique spectacle had stuck into my mind. So I told Vangelis that I would like us to go to a bookstore, in order to find relevant books and learn more about this strange and enchanting spectacle, one of the most extraordinary I have seen in my life.

That’ s how I discovered what the Catalan Castells are.