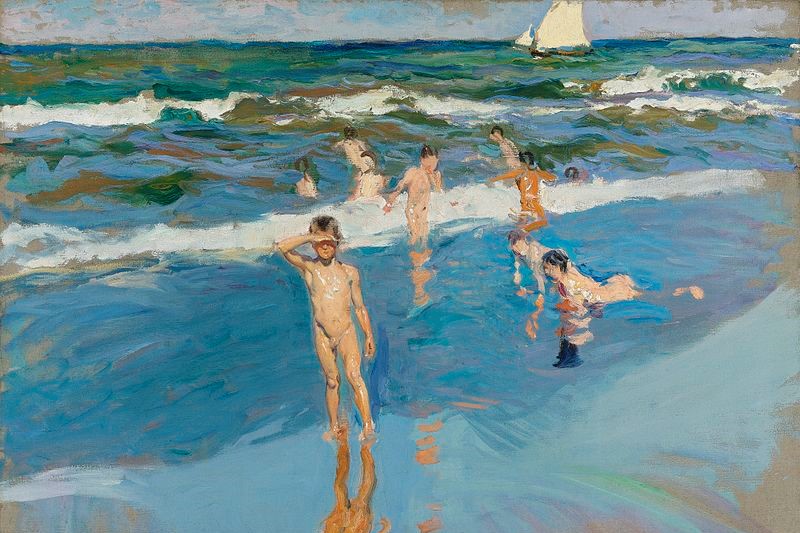 Pierre-Auguste Renoir (1841 – 1919) was a French artist who was also a leading painter in the development of the Impressionist style.

Renoir’s paintings are notable for their vibrant light and saturated color, most often focusing on people in intimate and candid compositions. Here we can see Renoir´s version of “La Grenouillère” (now in the National museum in Stockholm), which we also presented on our previous article, painted by Monet. Renoir’s version also shows the small island “camembert”, (left, out of picture), as well as the fashionable La Grenouillère floating restaurant and boat-hire point at Croissy-sur-Seine. It is interesting to observe the similarities in the technique, but also the subtle differences between his painting and the one painted by Monet, that point out each one´s personal style.

“Luncheon of the Boating Party” (1881, French: Le Déjeuner des canotiers) is, probably, my favorite of all Renoir’s paintings. Included in the Seventh Impressionist Exhibition in 1882, it was identified as the best painting in the show by three critics.

The painting shows a richness of form, a fluidity of brush stroke, and a flickering light. Combining figures, still-life, and landscape in one work, it depicts a group of Renoir’s friends on a lazy summer day relaxing on a balcony at the Maison Fournaise boat restaurant along the Seine river in Chatou, France. The painter and art patron, Gustave Caillebotte, is seated in the lower right. Renoir’s future wife, Aline Charigot, is in the foreground playing with a small dog, an affenpinscher. She replaced an earlier woman who sat for the painting but with whom Renoir became annoyed. On the table we can see fruit, as well as a great deal of wine.

The diagonal of the railing serves to demarcate the two halves of the composition, one densely packed with figures, the other all but empty, save for the two figures of the proprietor’s daughter Louise-Alphonsine Fournaise and her brother, Alphonse Fournaise, Jr, which are made prominent by this contrast. In this painting Renoir has captured a great deal of light. The main focus of light is coming from the large opening in the balcony, beside the large man with the hat. The singlets of both men in the foreground, the lace collars on the dresses of the two sitting ladies and the table-cloth all work together to reflect this light and send it through the whole composition. The painting is now in The Phillips Collection in Washington, D.C.

Mary Cassatt (1844 -1926) was an American painter, but lived much of her adult life in France where she befriended Edgar Degas and exhibited with the Impressionists. Cassatt often created images of the social and private lives of women, with particular emphasis on the intimate bonds between mothers and children. She was described By Gustave Geffroy as one of “les trois grandes dames” (the three great ladies) of Impressionism along with Marie Bracquemond and Berthe Morisot. In 1879, Diego Martelli compared her to Degas, as they both sought to depict movement, light, and design in the most modern sense.

By the time Cassatt exhibited her painting “Children playing on the Beach” (Washington National Gallery of Art) at the eighth and final impressionist exhibition in 1886, her reputation as a painter of mothers and children had been well established. Critics had long commented on her ability to portray her subjects in a tender, yet unsentimental, way.

In this work, Cassatt tightly cropped the scene, tilted the picture plane forward, and reduced the number of objects in the background to draw attention to the two little girls digging in the sand. Absorbed in their activity, they embody the naturalistic attitude prevalent in both art and literature of the time.

Various shades of blue—from the deep electric blue of the dress and shoes to the soft, diffused blue of the ocean—are used throughout the work. Accents of white convey the presence of sunlight bouncing off the dresses, hats, and pails of the little girls.

Cassatt painted “The Boating Party” (Washington National Gallery of Art) during the winter of 1893–1894 in Antibes, on the French Riviera. She spent January and February 1894 at the Villa “La Cigaronne,” in Cap d’Antibes with her mother.

The painting depicts an unknown woman, baby, and man in a sailboat. The boat has a canoe stern, is boomless, and has three thwarts. The inside of the boat is described as yellow. It is an unusual painting in Cassatt’s œuvre. While it does show her familiar theme of a mother and child, most of her other paintings are set in interiors or in gardens. It is also one of her largest oil paintings. Frederick A. Sweet suggests that Cassatt may have been inspired by Édouard Manet’s “Boating” (we’ ve seen it on our previous article).

Joaquím Sorolla i Bastida (1863 – 1923), was an important Spanish painter who followed the “current” of impressionism. What made his works stand out were the very intense, vivid and bright colors he used. Born in Valencia, he had been familiar since his youth with life on the sea and the beaches of Valencia.

In the 1890s he repeatedly returned to the subject of fishermen from Valencia. In some very large paintings, he showed fishermen bringing their catch ashore or pulling their boat onto the beach with oxen. He also portrayed boatbuilders or fishwives, not a glamorous life of leisure activities, but working people at sea. For this work, he received very positive reviews and was awarded prizes. In addition, these works brought international success. On of these painting was “The Valencian fishermen” (“Los pescadores Valencianos“), painted in 1895.

In 1900 Sorolla began to paint children bathing at the Valencian beaches. It soon became one of his favorite themes. In the 1904 painting “Bathing time” (in Spanish “La hora del baño”) Sorolla linked fishing and bathing children and portrayed children swimming between a fishing boat and an ox standing in the water. In the foreground one of the children comes from the sea and is awaited by a young woman who stretches out a white cloth to dry the wet child. So the white fabric plays a central role: The movement of the cloth in the wind is already the main subject, the shore area between the water and beach has no clear contours and the whole picture is bathed in the light of early evening.

“Children on the Beach” (1910) depicts a beach of crystal clear waters, with three children on it. They are lying naked upside down on the muddy sand, while the water licks their skin, having different positions and attributes: one of them, blond and fair-skinned, as well as seemingly younger, leans on one elbow looking at two other children, brown and darker-skinned, whose bodies lie in another direction. One of them is looking at the first with a smile on his face, while the other is oblivious to the scene. The blond boy is less sunk in the sand than the other two, as well as profiled in greater detail; the soles and toes, as well as the muscles of the legs, glutes, and back, possess greater definition than the brown ones. These are half-buried in the moist sand, their bodies being much more diffuse. The painting is exhibited at the Prado Museum in Madrid.

On the top of the article we can also see Sorolla’s “Children in the sea, Beach of Valencia” (“Niños en el mar, Playa de Valencia). We can see, again Sorolla’ s favorite theme – children playing and having fun in the sea. Nothing can represent life better. One of these children, blinded by that overwhelming light, shades his eyes with his hand to look at us. He is waiting for us, as if inviting us to bathe with them, to get into that sea, in that light, in that life.

Edward Henry Potthast (1857 – 1927) was an American Impressionist painter. He is known for his paintings of people at leisure in Central Park and on the beaches of New York and New England. By 1915 Potthast began to portray the ocean beaches adjacent to New York City, a subject with which he is closely identified. His paintings, which are mostly undated, bear titles of Coney Island, Manhattan, Brighton, Rockaway, and even Long Beach, which indicates the extent of Potthast’s excursions along the Long Island shore.

While recent writers have linked Potthast’s beach scenes with the painters surrounding Robert Henri, including William Glackens and Maurice Prendergast, his closest affinity is with the Joaquín Sorolla who, as we have already seen, painted brilliant colour-saturated scenes of the Valencian coast.

Potthast’s ocean-side scenes portray the middle and lower-middle classes, native-born Americans and the more recent immigrant arrivals, who shared in the ocean shore a common ground of pleasure. The sand and surf of the coast allowed a release from the pressures of urban stress. By 1900 several hundred thousand visitors journeyed to Coney Island on Sunday afternoon. Potthast’s paintings portray mostly women and children. The man of the family, working five and a half or six days a week, seldom appears in Potthast’s canvases, which were more likely painted during the less crowded weekdays which allowed the artist at least a modicum of privacy.

In the following painting, called “Summer day – Brighton beach“, we can see a group of children, getting their feet wet and playing with the waves. They are probably not going to enter the sea, as they are all wearing their clothes. Their silhouettes as well as the sea waves and sky are rendered with broad brushstrokes. The gestures of the figures reveal an intimate observation of the social activities of the shores.

Although he often painted figures bathing in the sea, Potthast’s seaside paintings frequently show also the indolent leisure of figures along the shore. “The opportunity to bathe in the Old Ocean is not the only attraction of the beach” noted a 1906 description of Coney Island, “Great crowds find rest and recreation in sitting on the sands and enjoying the cool breezes, as they gaze across the sea at passing vessels.” As in the following painting of 1910 “In the dog days“, where we can see crowds of bathers, contemplating the sea and, probably seeking for some coolness coming from the sea breeze.

As a contemporary reviewer noted, “There are few clouds on Potthast’s horizon and when they do move over his azure skies, they are creamy white or rose color. He is a painter of the ‘joy of life, ‘ of ‘summer and sun, ‘ and his art is distinctly inspiring.“

etiquetes
We use cookies on our website to give you the most relevant experience by remembering your preferences and repeat visits. By clicking “Accept All”, you consent to the use of ALL the cookies. However, you may visit "Cookie Settings" to provide a controlled consent.
Cookie SettingsAccept All
Manage consent

This website uses cookies to improve your experience while you navigate through the website. Out of these, the cookies that are categorized as necessary are stored on your browser as they are essential for the working of basic functionalities of the website. We also use third-party cookies that help us analyze and understand how you use this website. These cookies will be stored in your browser only with your consent. You also have the option to opt-out of these cookies. But opting out of some of these cookies may affect your browsing experience.
Necessary Sempre activat
Necessary cookies are absolutely essential for the website to function properly. This category only includes cookies that ensures basic functionalities and security features of the website. These cookies do not store any personal information.
Non-necessary
Any cookies that may not be particularly necessary for the website to function and is used specifically to collect user personal data via analytics, ads, other embedded contents are termed as non-necessary cookies. It is mandatory to procure user consent prior to running these cookies on your website.
DESA I ACCEPTA