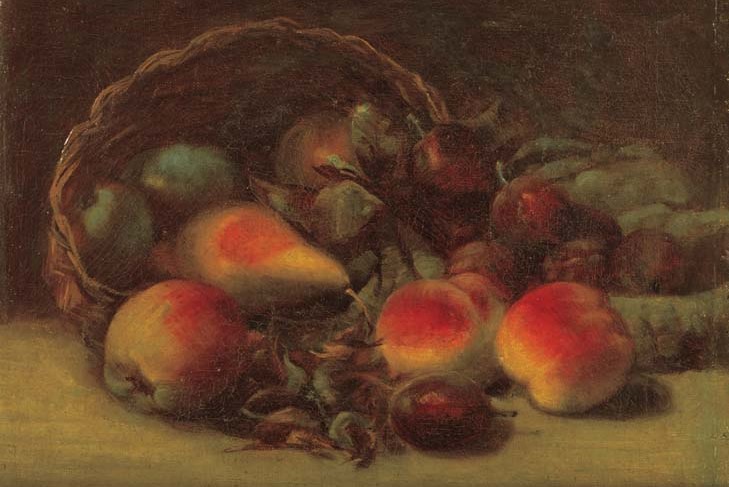 Pericles Pantazis (1849 -1884) was a major Greek impressionist painter of the 19th century – a student of Nikiforos Lytras – who gained a great reputation as an artist in Belgium.

Without despising the principles of realism, Pantazis joined the artistic movement of impressionism. In fact, some consider him the founder of Belgian Impressionism, along with Guillaume Vogels.

The artist soon adopted still life as his theme, in combination with scenes from everyday life.

More specifically, he inserted the human figure into the still life as a substantive presence. This style of his brought by realism, combined the grandeur of human existence with the poetry of simple daily things, something that we mainly meet in the genre art.

As in the following painting, where we can see a woman, standing at the edge of a table, piled with various food products.

The female figure is captured in the act of carrying out her domestic duties, with a tranquility and a seriousness in her expression. She is probably a maid, belonging to the kitchen stuff, as we can assume by the fact that she is wearing a hat and a white apron. What is quite interesting are the details on the hat – a black velvet ribbon and a white lace. For her clothes the painter has chosen a dark grey colour.

In the front of the scene, we can see an abundancy of food products. Game, ham, and lobster – symbols of wealth and prosperity. We can also see some onions, as well as many green vegetables, mostly of the brassica family, among which a piece of cauliflower and a red cabbage. We must point out that the depictions of brassica vegetables, were quite rare in most of Greek food paintings of that period. But, as we already mentioned, Pantazis lived and worked in Belgium, where these products had always been very common, so we should not be surprised by their use in this case.

In my opinion, the woman plays a significant role in the scene, but does not stand out. We can presume so, since she is placed at the side of the table, without being particularly illuminated, while the food stands at the center of the painting.

We can also presume it by the chosen colours. Indeed, unlike the colours of the woman’s clothes, which are rather dark and monotone, those of the food are bright and vivid, especially the red of the lobster, which is, moreover, placed in a luxurious painted porcelain dish. This deliberate contradiction, makes it obvious that Pantazis does not consider the woman the protagonist of his painting, but the food.

Pantazis exhibited this painting at the 1878 Paris World`s Fair.

In the above painting we can see again a combination of food still life with genre painting in an impressionistic approach, presenting an everyday life scene of a boy, depicted in the action of eating a watermelon.

The scene is placed in an alley of the Athenian Plaka district, as it is clearly understood by the narrow streets with the steps of the church of “Our Lady of Chrysokastriotisa” in the background and the ancient column that we can see at the corner on the left of the wall.

The protagonist of the painting has leaned on the wall of a building, has laid his basket on the ground and is eating a slice of watermelon. In one hand he is holding the watermelon and in the other a jackknife, with which he has apparently cut the slice. He really seems to enjoy the coolness that the ultimate summer fruit offers him.

From his clothes, and from the fact that he is barefoot, we understand that the boy is not a rich one, but probably belongs to the popular class. The boy’s appearance is complemented by his straw hat and basket, elements that the painter uses, apparently, to give the viewer the feeling that the scene unfolds during a summer day, and thus to justify the watermelon he chose as the fruit that the boy enjoys.

The fact that this is a summer day can be also assumed by the intense shadow of the boy’s figure on the wall and, furthermore, by the colours used, ochre and a suspicion of blue sky at the background of the painting, which help create a luminous, almost blinding atmosphere.

I really love this painting, because of its relaxed and carefree mood, as it fits on a summer day.

Retrospective exhibitions of the work of Pantazis have been presented at the City Hall of Saint-Gilles in Brussels (1993), at Namur (1994), and at the National Gallery of Athens (1996).

Paintings of the artist are currently exposed at the Gallery E. Averof at Metsovo, Pantazis´s town of origin.