A walk at the Philopappou Hill 2 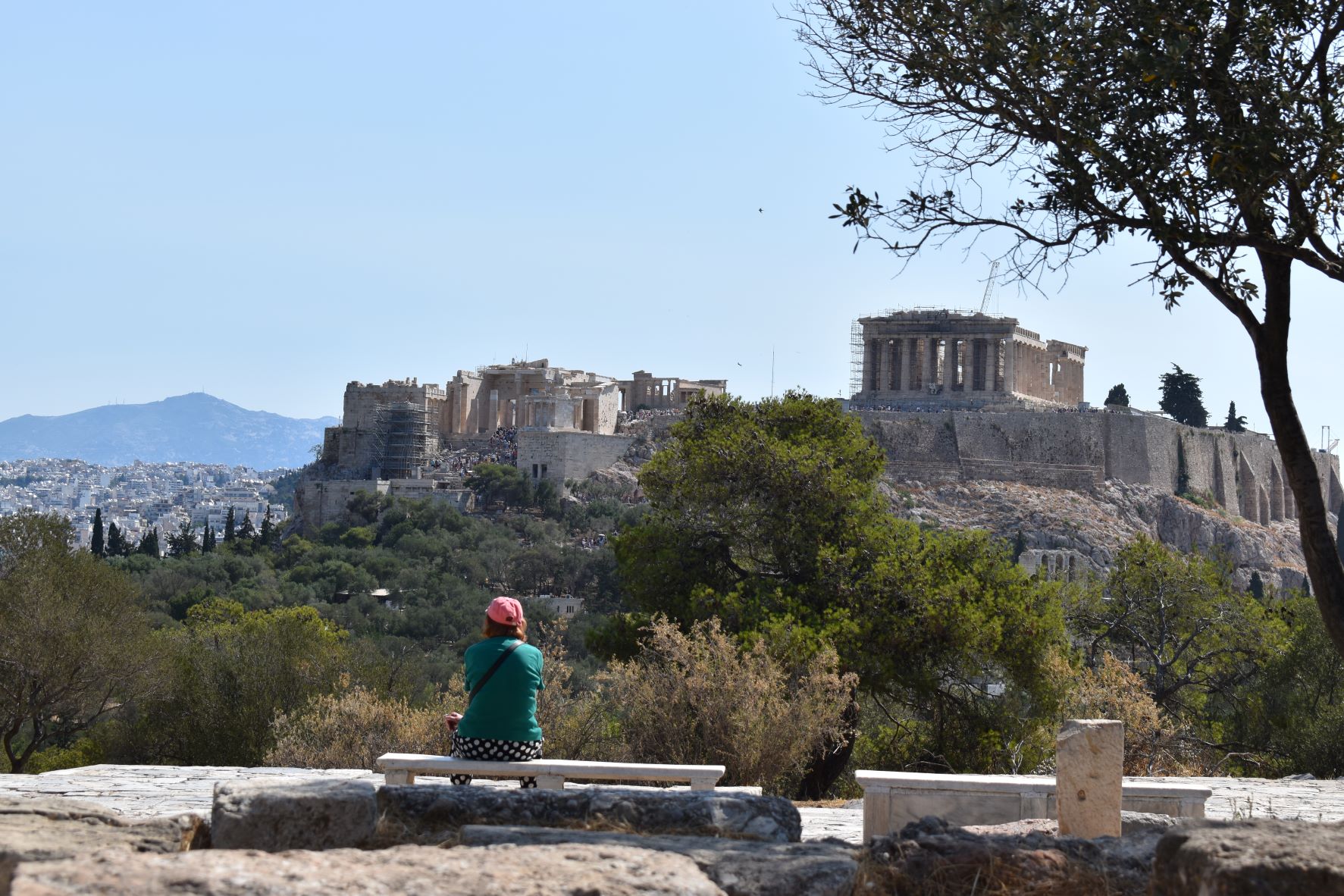 Moving upwards through the stoned paths of Pikionis, we arrive to a marbled square with resting benches and small stone works, build on the north east edge of the hill, from which we can admire one of the most magnificent views worldwide.

It is Acropolis, standing just opposite the hill in such a close distance, it gives the impression that it can almost be touched by hand. Actually, one can clearly see from that point the temple of Parthenon, the Propylaea, but also the Odeon of Herodes Atticus (Herodion Theatre).

The square is called Andiron  and it is, also, a creation of Pikionis, who made it for this exactly for that reason: So that the visitor can rest and contemplate the undisturbed view of antiquity’s most famous Greek monument.

So catch your breath, rest for a while and make sure to take full advantage of one of the most privileged points for capturing the Acropolis.

We continue walking on the paths of Pikionis, passing through ancient rocks, marble benches and dense pine trees and olive trees.

After a while we find ourselves to another square, which is almost hanging to the northeast crest of the hill.

It is a rock cut surface with niches for statues, benches and alters for offerings, which is claimed to belong to the funeral monument of poet Mousaios, known as the Heroon of Mousaios.

Actually, according to the ancient traveler Pausanias, the hill took its former name – which was Muses hill – from that poet, who is believed to have lived, taught and been buried there. It is more probable, however, that the hill took that name from a sanctuary of the Muses to whom the hill must have been dedicated.

A few meters higher, at the top of the hill, the famous Mausoleum of Philopappos is standing. It was erected in the 2nd century AD and it has since prevailed over the Hill, giving it its actual name.

The 12 meters monument is a burial chamber that was built in honour of Gaius Julius Antichus Philopappos, Prince of Commagene (a region of the Upper Syria) and a a great benefactor of Athens, who was highly esteemed by the Athenians.

The location of this burial monument, opposite the Acropolis and within the formal boundaries of the city (according to the Ancient Athenian customs, it was not allowed to build tombs inside the city’s walls), shows the high position Philopappos had within the Athenian society.

The monument is made of pentelic marble and it stands on a porous krepsis. Its craved façade facing the Acropolis is divided in two zones. The upper zone comprises three deep niches to support seated statues.

On the lower level there is a freeze depitcting Philopappos riding on a chariot and led by lictors. The burial chamber in the form of a naiskos which housed the Philopappos’ sarcophagus used to be located behind the façade.

The monument survived intact until the 15th C. but gradually fell victim to vandalism. It was partially restored by the civil engineer N. Balanos in 1904. Today, only two-thirds of the façade remain.

Close to the tomb and obscured from sight, there stands a stone structure with iron gates, spacious enough to “accommodate” a man.

According to the tradition, this grove was the prison where the great Greek philosopher Socrates was imprisoned and died.

It is midday. The sun has already risen high in the sky and the heat is starting to exhaust us. After resting for a while on a bench under the shade of the trees and taking one last look at the unique view of the Acropolis, we begin our descent to the northeast side of the hill.

As we are leaving the Hill of Philopappou, we discuss about how lucky we are to be able to enjoy this unique walk, that offers us a journey back to our History.

I inform you that we owe the free access to the hill to the struggle given by an active residents’ movement formed in 2002, aiming to defend the natural and free character of the Hill.

For more than 10 years the residents of the neighborhoods surrounding the Hill have challenged the plans of the Ministry of Culture to fence the entire zone and restrict access by imposing visiting hours and an entrance fee, as a part of the framework of the Unification of Archaeological Sites of Athens.

Τhe belief of the movement was that the best protection for the Hill would be guaranteed by the love, care, and active participation of the local people.

The battle was legally won in 2015, by decision of the Council of State. As a result of their tenacity, the largest and most naturally beautiful public space in Athens remains free and open to all, day and night.

publicat a DG viatges i oci Escapes in Greece