A walk at the National Garden 2 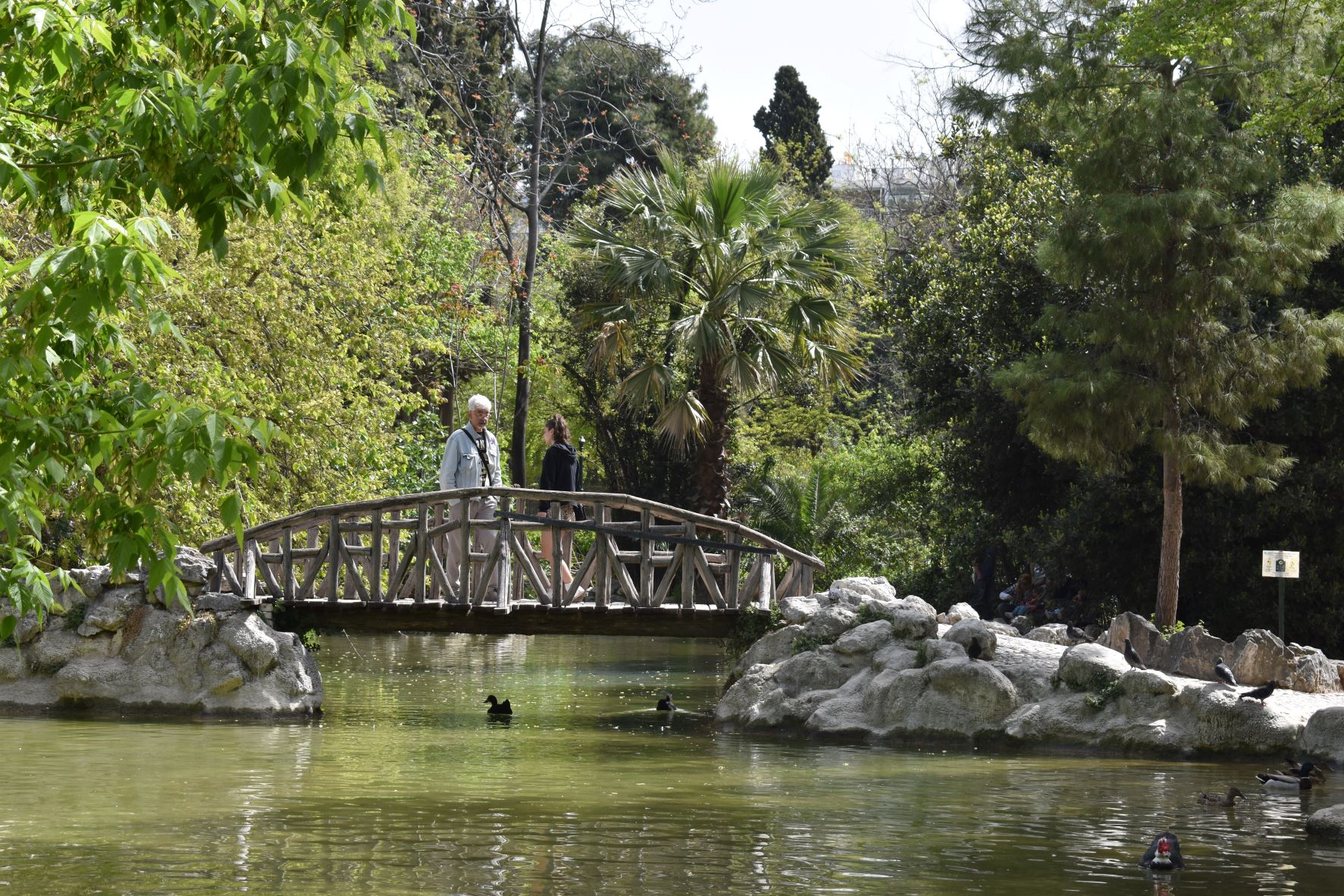 In this green heart of Athens, there is also a large lake, where ducks and swans play. It is a point that attracts many visitors. Actually, one of the favourite activities of the Athenians – mostly the children – throughout the years, is the feeding of the ducks of the garden.

In the small oval pond next to the main lake, one can encounter a population of water turtles, while in the round lake near the entrance of Vasilissis Sofias Avenue, carps swim.

These lakes, ponds and cisterns, apart from being a home to various nature’s creatures, also act as water reservoirs, that channel water for irrigation.

Actually, although little understood, a whole irrigation circuit, runs parallel and beneath the paths, maintaining the microclimate in the National Garden. I consider it rather impressive, so let me tell you a few more things about it.

This irrigation circuit was designed during the construction of the garden, based on the traditional methods of Arab agriculture, utilizing the slope of the soil so that water can flow naturally into each of the 133 individual planted apartments, found in the Garden.

It consists of an extremely complex system with aqueducts, ditches and wells. It remains almost unchanged from the middle of the 19th century, when the Garden was created.

Most of this age-old irrigation network is still functioning today. Τhanks to it, hundreds of plant species that were initially planted, have survived through time.

But perhaps even more curious is the fact that, for the most part, the available water of the National Garden comes from the Peisistratio Aqueduct, a construction of 540 BC. This is now reinforced by four boreholes and an in-well, but the ancient aqueduct remains the central life-giving source.

In the area of the National Garden there is also a Children’s Library.

The original building was constructed in 1848. At first, it housed the office of the gardener Barraud.

Later, the same building became the refuge of Amalia, who loved it particularly, because it reminded her of Swiss houses. In fact, to enhance this feeling outside she had planted a fir tree.

The Library was founded in 1984 by the Ministry of Agriculture, in the context of the creation of a network of Children’s Libraries in rural areas throughout Greece.

It has two reading rooms, a fairy tale room and a music and screening room. When it started, it had only 1,500 books on its shelves, while today it exceeds 6,000.

The garden is also home to a small zoo which hosts animals and birds such as goats, chamois, bunnies, ducks, geese, chickens, swans, parrots, pigeons and peacocks.

There are also many interesting several gazebos and secluded romantic corners, as well as ornamental elements in the Garden, such as metal benches, pergolas and caves.

The most characteristic is Queen Amalia’s pergola – 80 meters long and 4 meters wide – with porcelain pillars and covered by baciana roses.

Another beautiful spot is the 20X20 wisterias room with the cave, made of limestone cobblestones, in the background.

Finally, throughout the Garden one can admire various statues of personalities created by remarkable sculptors.

Busts, such as those of Ioannis Kapodistrias, first governor of Greece, celebrated Greek poets, such Dionysios Solomos, author of the Greek National Anthem, Aristotelis Valaoritis and Jean Moreas – born Ioannis Papadiamantopoulos – who mostly wrote poetry in the French language, having received a French education, the great Philhellene and national benefactor Jean-Gabriel Eyanard and others, are scattered in prominent parts of the Garden.

In 2011 the National Garden was characterized as an historic place.

Well, I believe I’ve already shown and told you enough…

I will sit on this bench to read my book and let you wander around the shaded pathways of this tropical paradise. I am sure, you will soon forget that you are in the middle of the concrete jungle of Athens!

Published in DG travel and leisure Escapes in Greece